Backtrace can connect to public and private symbol servers to speed debugging time and make sure every call stack is human readable.

Written by Jason Davis
Updated over a week ago

Debug symbols are needed when crashes are reported from binaries that have information such as function names and line numbers stripped away. Without debug symbols, Backtrace can't provide human-readable call stacks or deduplicate effectively. Backtrace offers customers the ability to upload their symbols directly to our systems, or to retrieve symbols from your managed private symbol server on demand.

Customers on our Enterprise plan can manage whitelists and blacklists for the default public symbol servers, and can add their own private symbol servers to simplify configuration and speed up debugging time by making sure every call stack is human readable. Specific features we will review in this guide include:

Symbol Servers can be accessed under Project Settings

For each project, you can view information about the default public symbol servers configured by Backtrace. These include symbols servers for msdl.microsoft.com, symbols.mozilla.org, electron-symbols.githubapp.com, and download.amd.com.

If you are on an Enterprise plan and dedicated or on-prem host, you can self manage connections, retries, blacklist, and whitelists for these default public symbol servers configured by Backtrace. If you are on a shared deployment (non-enterprise), you will share public symbol server configurations with all other organizations on your shared host. As such, you can view shared information such as the stats and usage, whitelist, blacklist, skiplist and logs, but you can not edit these. 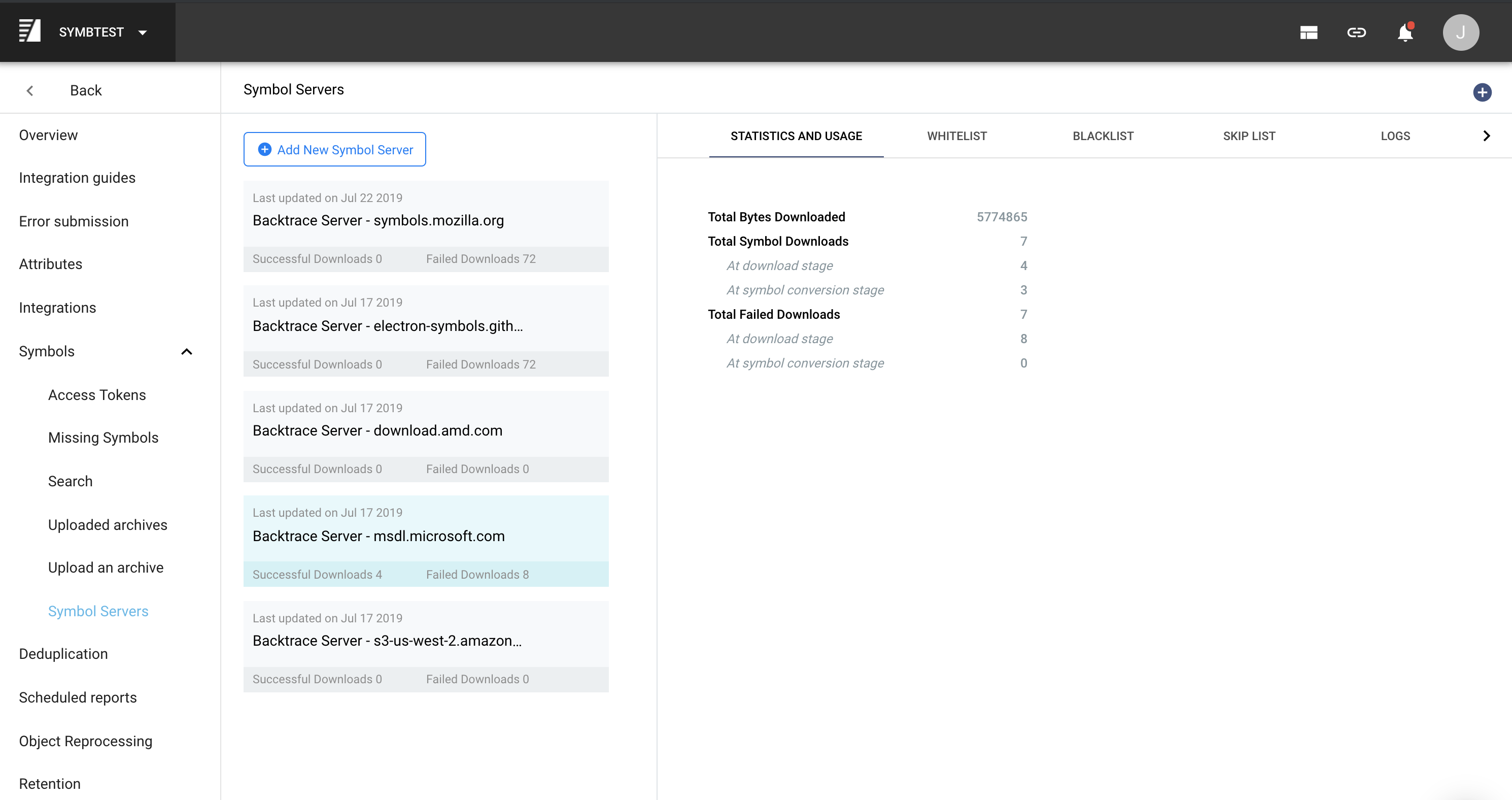 NOTE - These default public symbols servers are scoped to your entire organization. This means that usage and statistics, white list, black list, skip list and logs will not change from project to project. Following is some brief information about each of the tabs and the data within them

Customers on our Enterprise plan can add new private symbol servers to connect to. These can be a symbol server or symbol store provided by Microsoft Debugging tools for Windows, or a simple AWS S3 Bucket.

You will need the following information to connect:

See a screenshot of the Add Symbol Server UI below: 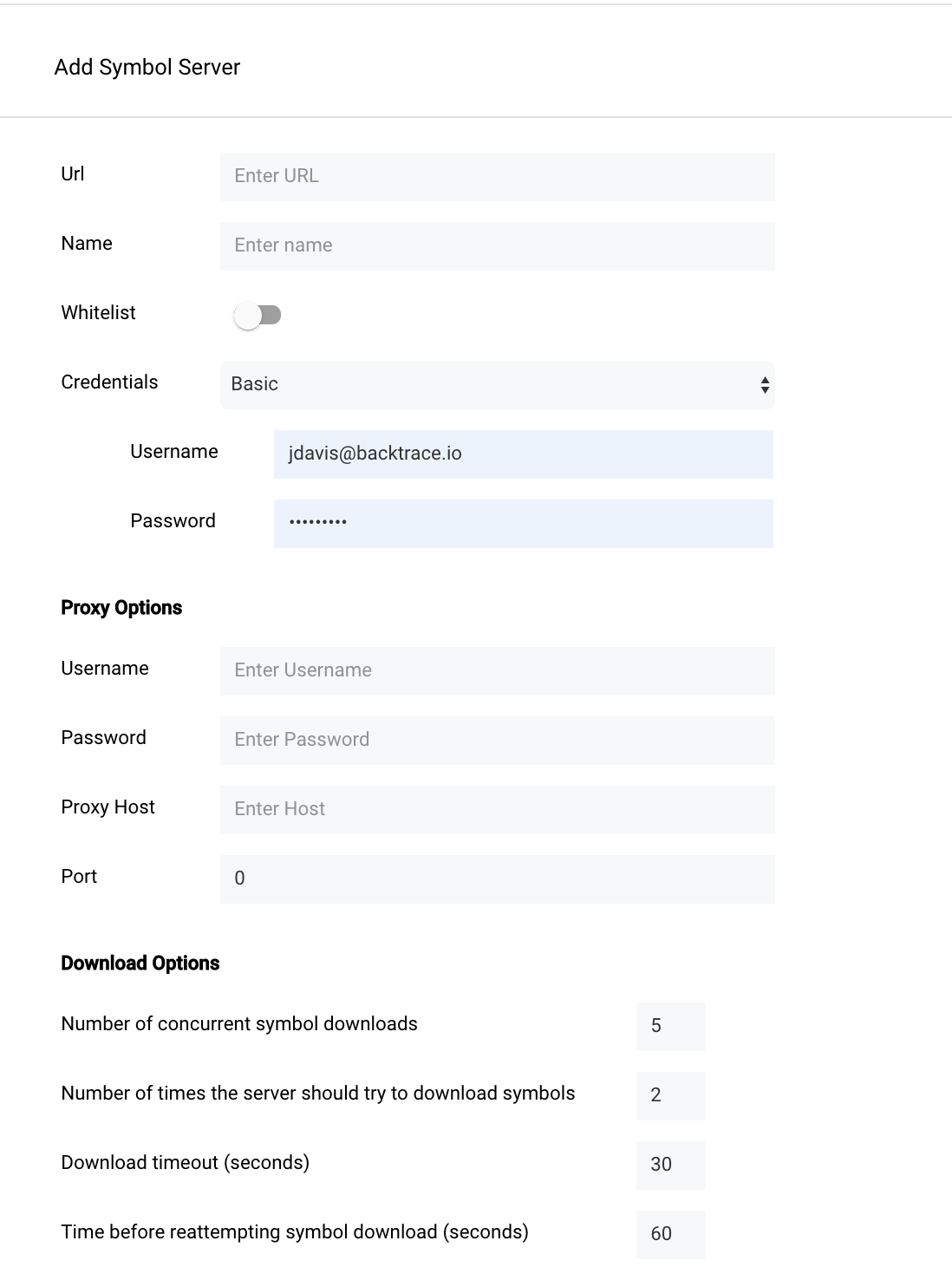 When an admin adds a new symbol server, symbold will validate connection. By doing that we will avoid a situation when defined symbol server doesn’t work because of connection problems.

After Adding a Symbol Server, you can Edit or Delete it using the context menu on the entry.

For each selected symbol server, you can view usage and download statistics. This includes:

For each server, you can manage a whitelist and a blacklist.

It is most common to configure the blacklist for any symbols that you don't want to download from the symbol server. User would set these if they won't change anything on their stack trace information, won't add any additional debugging information, might cause only networking problems (i.e files too big, they change too often).

Items in the whitelist will be fetched if the server itself has toggled whitelist mode on.

Entries can be deleted from the whitelist or blacklist by hovering over row and choosing the delete icon.

Following is a screenshot to show the whitelist entries and a dialog to enter more items to the whitelist, as well as a delete icon for one of the items in the list to show how it can be removed. 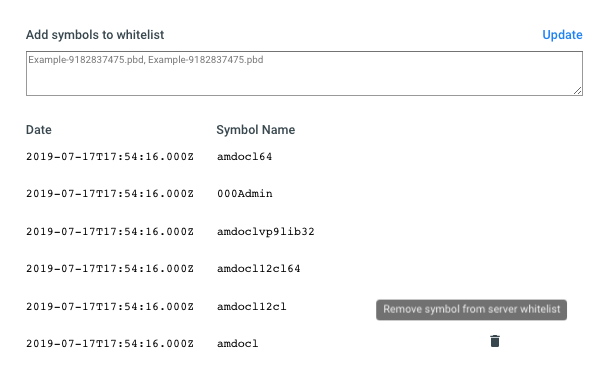 Skiplist - Items appear in the skiplist when they cannot be fetched after multiple retries. The administrator can specify the retry information in the main configuration for the symbol server. Items in the skiplist will be skipped during subsequent download attempts so as to not cause further download issues. Items can be removed from the skiplist using the delete icon if you want to retry download for them. 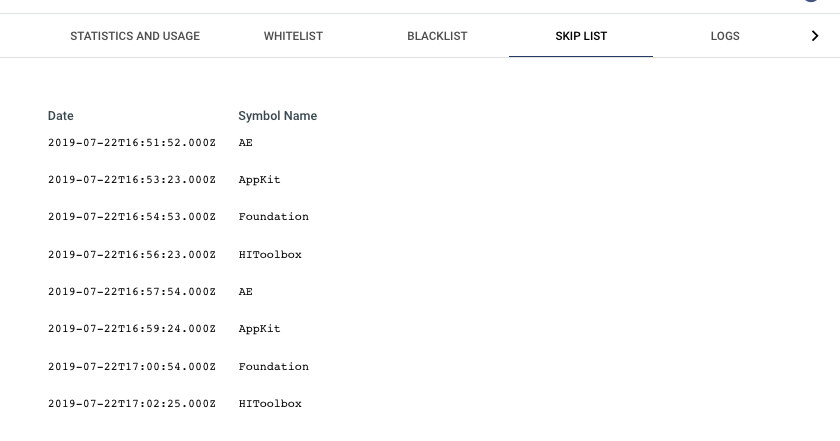 The Logs tab shows successful and failed attempts at downloading, receiving, or retrying, amongst other. This is useful to understand how the symbol server connection has been behaving. 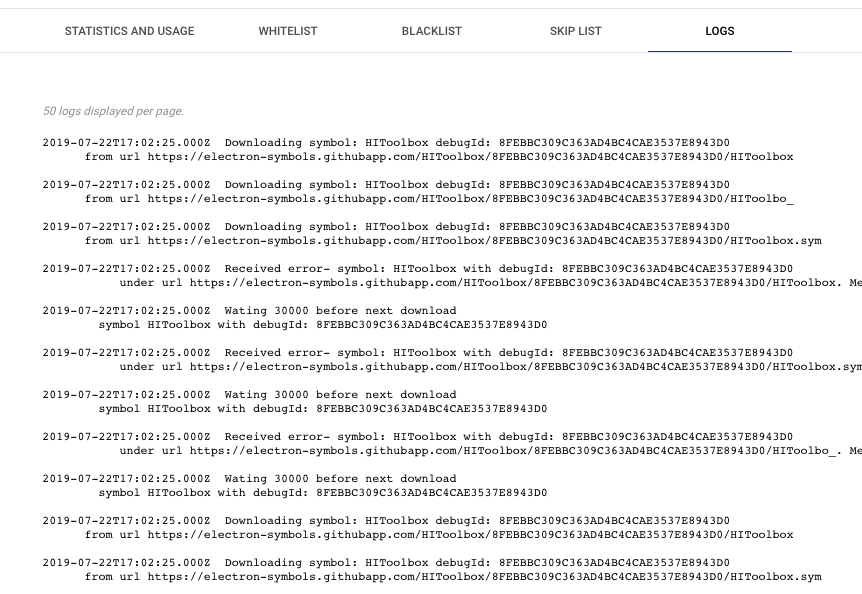